Plant a tree in memory of Wasyl
An environmentally-friendly option 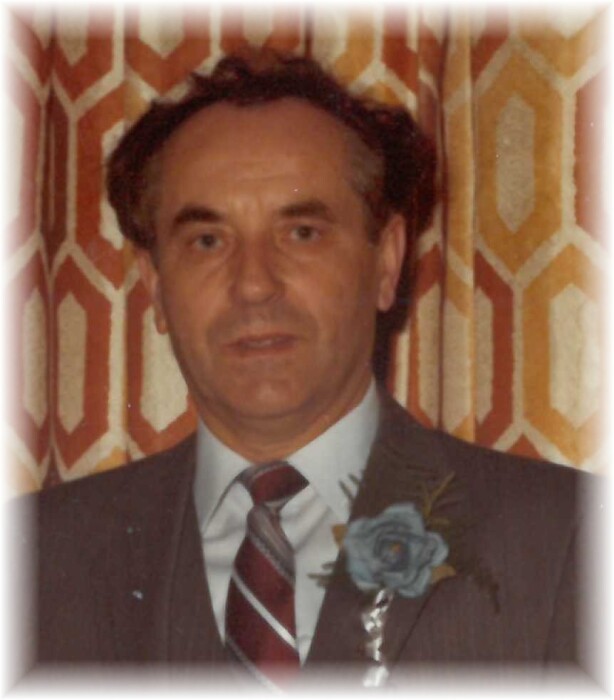 It is with great sadness that we announce the passing of Vasyl Kucharsky aged 93 at the Holy Family Home in Winnipeg on Tuesday June 1, 2021. Left to cherish his memory is his loving wife of 65 years, Eugenia, his sister Anna and nephews Vasyl and Roman and their families in Ukraine, as well as numerous friends and colleagues across Canada, the US and Great Britain.

Born into a patriotic family in the village of Markivtsi, near the city of Ivano-Frankivsk, Vasyl became involved in the Ukrainian nationalistic movement from an early age. At 18 he joined what later became the First Division of the Ukrainian National Army to fight against the Bolshevik invaders.  After the war, the Division crossed into Western Europe and was interned for 2 years in Rimini (Italy).  Emigrating to Great Britain, Vasyl became involved in Ukrainian cultural life especially Ukrainian dancing, through which he met his future wife, Eugenia, whom he married in 1956.

Together they moved to Winnipeg in 1968.  In addition to his work as a machinist at Buhler Industries, Vasyl continued his involvement in the Ukrainian community.  He was an active member of St. Andrew’s Ukrainian Catholic Church and together with Eugenia sang in the church choir.  He joined the Canadian Ukrainian Institute Prosvita, where he was Treasurer for several decades, and the League of Ukrainian Canadians (LUC), where he was Secretary.  For many years, Vasyl was the Manager of the IPAC soccer club ‘Ukraina’.  He sang in Prosvita’s ‘Dumka’ choir and catalogued and edited the histories of IPAC and the Winnipeg LUC branch. In addition, Vasyl and his wife were known for their philanthropy, donating to many worthy causes. For his many years of volunteerism , in 2014 Vasyl was bestowed by the Ukrainian Canadian Congress –Manitoba Provincial Council with the prestigious Bulava Award for community service, as well as with numerous awards, medals and certificates of merit by Institute Prosvita, LUC and the Organization of Ukrainian Nationalists.

Due to COVID-19 restrictions, a private service will be celebrated at the Sts. Volodymyr & Olha Cathedral on Saturday, June 5 at 10:15 a.m. with Rev. Ihor Shved presiding.  Interment will follow at All Saints Cemetery.  The services will be live-streamed through the Cathedral website and the graveside interment will be through the Korban Funeral Chapel Facebook page at www.korbanchapel.com.

Here is the link for the livestream from Sts. Volodymyr & Olha Cathedral https://www.youtube.com/watch?v=UG6_S2n84QY

In lieu of flowers, donations may be made to the Canadian Ukrainian Institute Prosvita, 777 Pritchard Avenue, Winnipeg, Manitoba, R2X 0E8

Plant a tree in memory of Wasyl by clicking here.
To send flowers to Wasyl's family, please visit our floral store.

A service summary is not available

Plant a tree in memory of Wasyl
An environmentally-friendly option

Plant a tree in memory of Wasyl

1 tree planted in memory of Wasyl

A Memorial Tree was planted for Wasyl Kucharsky

Plant a tree in memory of Wasyl